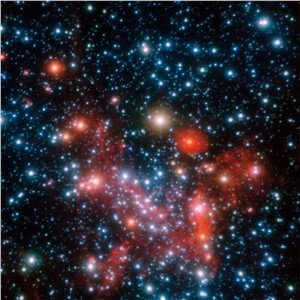 Reinhard Genzel and Andrea Ghez have jointly been awarded the 2020 Nobel Prize in Physics for their work on the supermassive black hole, Sagittarius A*, at the centre of our galaxy. Genzel, Director at the Max Planck Institute for Extraterrestrial Physics in Germany, and his team have conducted observations of Sagittarius A* for nearly 30 years using a fleet of instruments on European Southern Observatory (ESO) telescopes.

Genzel shares half of the prize with Ghez, a professor at the University of California, Los Angeles in the US, "for the discovery of a supermassive compact object at the centre of our galaxy", with the other half awarded to Roger Penrose, professor at the University of Oxford in the UK, "for the discovery that black hole formation is a robust prediction of the general theory of relativity."

"Congratulations to all three Nobel laureates! We are delighted that the research on the supermassive black hole at the centre of our galaxy has been recognised with the 2020 Nobel Prize in Physics. We are proud that the telescopes ESO builds and operates at its observatories in Chile played a key role in this discovery," says ESO's Director General Xavier Barcons. “The work done by Reinhard Genzel with ESO telescopes and by Andrea Ghez with the Keck telescopes in Hawaii has enabled unprecedented insight into Sagittarius A*, which confirmed predictions of Einstein’s general relativity."

ESO has worked in very close collaboration with Genzel and his group for around 30 years. Since the early 1990s, Genzel and his team, in cooperation with ESO, have developed instruments designed to track the orbits of stars in the Sagittarius A* region at the centre of the Milky Way.

In 2008, after 16 years of tracking stars orbiting Sagittarius A*, the team delivered the best empirical evidence that a supermassive black hole exists at the centre of our galaxy. Both Genzel's and Ghez's groups accurately traced the orbit of one star in particular, S2, which reached the closest distance to Sagittarius A* in May 2018. ESO undertook a number of developments and infrastructure upgrades in Paranal to enable accurate measurements of the position and velocity of S2. The team led by Genzel found the light emitted by the star close to the supermassive black hole was stretched to longer wavelengths, an effect known as gravitational redshift, confirming for the first time Einstein’s general relativity near a supermassive black hole. Earlier this year, the team announced they had seen S2 ‘dance’ around the supermassive black hole, showing its orbit is shaped like a rosette, an effect called Schwarzschild precession that was predicted by Einstein.

Genzel and his team are also involved in the development of instruments that will be installed on ESO’s Extremely Large Telescope, currently under construction in Chile’s Atacama Desert, which will enable them to probe the environment even closer to the supermassive black hole.