The Pressurized Cargo Module (PCM), developed by Thales Alenia Space, on a new resupply mission to ISS, with approximately 3,600 kg of precious cargo on board 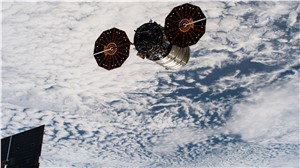 The Cygnus spacecraft, dedicated to deliver supplies to the International Space Station (ISS), has been successfully launched by an Antares rocket from Wallops Island, Virginia, on its 14th operational mission. Cygnus comprises two main elements: a Service Module, built by Northrop Grumman, and an enhanced Pressurized Cargo Module (PCM), developed and built by Thales Alenia Space, a joint venture between Thales (67%) and Leonardo (33%). Northrop Grumman also builds the Antares rocket.

Since 2013, Cygnus missions have been the main enabler of the safe resupply of the International Space Station, a lifeline designed to transport the fundamental cargo, including oxygen, water, scientific experiments, crew supplies, and spare parts. Since the end of 2015, the enhanced Cygnus configuration features a more efficient design, able to accommodate more payload weight (over 3,500 kg) and volume.

Each  resupply mission to the ISS contains crew supplies and vehicle hardware but also increasingly carries scientific investigations in the areas of biology and biotechnology, Earth and space science, physical sciences, and technology development and demonstrations.

The newly launched spacecraft is carrying a new raft of experiments such as Plant Habitat-02, dedicated to the Assessment of Nutritional Value and Growth Parameters of Space-grown Plants, which will cultivate radishes as a model plant that is nutritious and edible. This investigation is critical for NASA’s human exploration of the Moon and Mars. Two other experiments will be carried by Cygnus’s PCM: the Universal Waste Management System (UWMS) will demonstrate the technology for a compact toilet for astronauts and an investigation from the University of Puerto Rico will test oxidation of ammonia in microgravity as a potential means of producing water and energy to be used on deep-space exploration missions.

The Cygnus’s PCM will also carry an health investigation named Leveraging Microgravity to Screen Onco-selective Messenger Ribonucleic Acid (mRNA) for Cancer Immunotherapy that will test a biologic drug that could be used for the treatment of leukemia. As part of “the ISS Experience”, a cinematic virtual reality (VR) series documenting life and research aboard the space station, Cygnus’ PCM is carrying a 360 degree virtual reality camera which is set to capture a spacewalk in cinematic virtual reality as well as a footage of Earth and the exterior of the space station.

As an outpost of humanity in space, the ISS, for which Thales Alenia Space provided 50% of the pressurized modules, represents the largest and most complex space laboratory ever built, permanently inhabited for past twenty years, defying the difficult rules of physics, metrology, astronomy and interplanetary flight. The constant presence of astronauts in orbit is possible thanks to pressurized modules, that allow life and scientific research in the microgravity environment, and the development of useful technologies and knowledge, not only for space exploration, but to improve our life on Earth – in line with Thales Alenia Space  for Life aspiration.

Thales Alenia Space has supplied cargo modules to Northrop Grumman since the start of the Cygnus program. The first contract in 2009 was for the delivery of nine modules, while a second contract in 2016 added nine more. Fourteen operational PCMs plus a demo module have been launched to date, four in the original version and eleven in the enhanced version.

Tell a friend:
The 14th Mission of Cygnus Spacecraft on its Way to the ISS