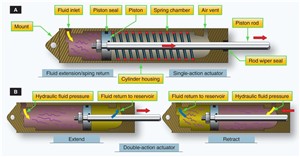 The report is projected to grow from USD 9.1 billion in 2020 to USD 21.0 billion by 2030, at a CAGR of 8.7% from 2020 to 2030. The market is driven by various factors, such as the growing trend of more electric aircraft and expected increasing demand for commercial aircraft, globally.

Honeywell International Inc. (US), Safran (France), Collins Aerospace (US), Moog (Us), and AMETEK (US) are some of the leading players operating in the aircraft actuators market report.