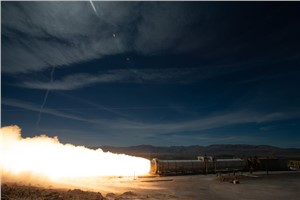 During the test, the 154-foot-long, five-segment rocket motor fired for just over two minutes, producing 3.6 million pounds of thrust. Two SLS boosters will provide more than 75 percent of the initial thrust for an SLS launch.

“NASA’s Artemis missions, powered by Northrop Grumman boosters, will push the boundaries of what is possible for human exploration in space,” said Charlie Precourt, vice president, propulsion systems, Northrop Grumman. “We have built, qualified and delivered flight hardware for Artemis I, and we are committed to the continuous improvement and testing of our products to provide the best solid propulsion to fuel NASA’s missions to the moon and beyond.”

The company developed this motor based on the flight-proven design of the space shuttle boosters with enhanced technologies and updated materials to support NASA’s most powerful rocket to date. The new five-segment booster configuration provides 20 percent greater average thrust than the shuttle boosters, aiding in the SLS rocket’s ability to deliver greater mass and volume by generating greater departure energy than any existing launch vehicle.

Prior to this test, NASA and Northrop Grumman conducted a series of ground tests beginning in 2010 to satisfy requirements for certification of the booster. FSB-1 evaluated ballistic parameters and performance of propellant materials from new sources, an upgrade to enable the booster to meet the high performance demands of SLS.

From the first lunar lander to the space shuttle boosters, to supplying the International Space Station with vital cargo, Northrop Grumman has pioneered new products and ideas that have been put into orbit, on the moon, and in deep space for more than 50 years. As a major contributor to NASA’s Artemis program, the company is building on its mission heritage with new innovations to enable NASA to return humans to the moon, with the ultimate goal of human exploration of Mars.