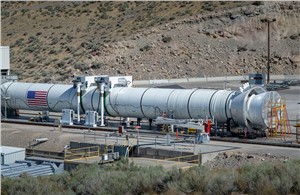 The Sept. 2 test at Northrop Grumman facilities in Promontory, Utah, will help teams evaluate potential new materials, processes, and improvements for the boosters that will power deep space missions beyond Artemis III. The test also will provide another opportunity to evaluate motor manufacturing and performance.

About an hour and 30 minutes after the test, media will have the opportunity to participate in a teleconference with:

To participate, media must contact Kathryn Hambleton at 202-358-1100 or kathryn.hambleton@nasa.gov no later than noon Tuesday, Sept. 1.

During the broadcast, anyone can submit questions on Twitter using the hashtag #AskNASA. Updates on the test will be posted on the Artemis blog.

Powered by four RS-25 engines and two boosters, the SLS rocket produces more than 8 million pounds of thrust to power missions to the Moon and, ultimately, Mars. The twin five-segment solid rocket boosters produce more than 75% of the rocket’s thrust during the first two minutes of ascent.

This latest booster test will take place as teams at NASA’s Kennedy Space Center in Florida begin assembling the boosters for Artemis I, the first launch of SLS and NASA’s Orion spacecraft.

The SLS rocket, Orion spacecraft, Gateway, and human landing system are part of NASA’s backbone for deep space exploration. The Artemis program is the next step in human space exploration and is part of America’s broader Moon to Mars exploration approach, in which astronauts will explore the Moon. Experience gained there will enable humanity’s next giant leap: sending humans to Mars.