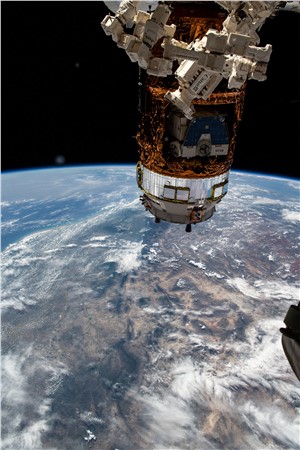 Eleven years after the launch of the first H-II Transfer cargo vehicle (HTV) to the International Space Station, the Japan Aerospace Exploration Agency’s (JAXA’s) HTV-9 will depart the orbital laboratory Tuesday, Aug. 18, with live coverage beginning at 1:15 p.m. EDT on NASA Television and the agency’s website.

Expedition 63 Commander Chris Cassidy of NASA will use the Canadarm2 robotic arm to release the spacecraft from the station at 1:35 p.m., ending its three-month stay. To prepare for release, flight controllers operating from NASA’s Mission Control Center at the agency’s Johnson Space Center in Houston will send commands to unbolt and detach the uncrewed cargo craft from the station’s Harmony module and remotely operate Canadarm2 to move it into place for departure.

This will be the final station departure of JAXA’s Kounotori, or “white stork,” model cargo craft, nine of which have delivered more than 40 tons of supplies to space station crews.  JAXA is developing a new fleet of HTV cargo craft, the HTV-X, which is targeted for its first launch in 2022.

The spacecraft, which launched from the Tanegashima Space Center in Japan on May 20, delivered about four tons of supplies and experiments to the orbital complex, including new lithium-ion batteries that were used to upgrade the station’s power systems. The new-technology batteries were installed through a series of spacewalks along the far port truss “backbone” of the station.

HTV-9 will be commanded by JAXA flight controllers at its HTV control center in Tsukuba, Japan, to move away from the station and, on Aug. 20, to fire its deorbit engine in a burn that will send it back into Earth’s atmosphere. Loaded with trash from the space station, the spacecraft will burn up harmlessly over the Pacific Ocean.

For nearly 20 years, astronauts have continuously lived and work on the space station, testing technologies, performing science and developing the skills needed to explore farther from Earth. As a global endeavor, 240 people from 19 countries have visited the unique microgravity laboratory that has hosted more than 3,000 research and educational investigations from researchers in 108 countries and areas.

Through NASA’s Artemis program, the agency will send astronauts to the Moon by 2024, with eventual human exploration of Mars. Inspiring the next generation of explorers – the Artemis Generation – ensures America will continue to lead in space exploration and discovery.