The launch of the NASA/ESA/CSA James Webb Space Telescope (Webb) on an Ariane 5 rocket from Europe's Spaceport in French Guiana is now planned for 31 October 2021. 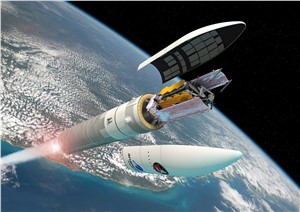 NASA has announced the decision, based on a recently completed schedule risk assessment of the remaining integration and test activities before launch, accounting for impacts from the COVID-19 pandemic and technical challenges. Previously, Webb was targeted to launch in March 2021.

Testing of the observatory continues to go well at Northrop Grumman, the mission’s main industry partner in Redondo Beach, California, despite the challenges of the coronavirus situation. The factors for the new launch date include the impacts of augmented safety precautions, reduced on-site personnel, shift work disruption and technical challenges. This year, a final set of complex environmental tests of the full observatory will be completed followed by a final deployment of the telescope and sunshield.

“Webb is an unprecedented endeavour in space science, requiring utmost ingenuity in both the scientific and technical domains, in a very strong international partnership,” said Prof. Günther Hasinger, ESA Director of Science. “The breakthrough science enabled by Webb will revolutionise our understanding of the Universe.”

The observatory will detect light from the first generation of stars and galaxies that formed in the early Universe and will study the atmospheres of habitable exoplanets.

As part of the collaboration with NASA, Europe is contributing to the Webb observatory with two critical scientific instruments — the NIRSpec spectrograph and the MIRI mid-infrared instrument — and the launch service using the Ariane 5 launch vehicle. In addition, there is a contingent of ESA scientists and engineers supporting the observatory development and science operations.

Next year, Webb will be will folded in its launch configuration for shipment to the launch site and fitted inside the Ariane 5 launcher fairing (about 5 m wide). On its journey into space, Webb will be the first mission to complete an intricate and technically challenging series of deployments — a critical part of Webb’s journey to its orbit about one and a half million kilometres from Earth. Webb will unfold its delicate five-layered sunshield until it reaches the size of a tennis court. It will then deploy its 6.5 m primary mirror that will detect the faint light of distant stars and galaxies.

Webb will be next great space science observatory, and will build on the success of another international endeavour, the Hubble Space Telescope, to solve the mysteries of our Solar System, to explore distant worlds around other stars and to uncover the origins of our Universe.

The James Webb Space Telescope is an international project led by NASA with its partners, ESA and the Canadian Space Agency.