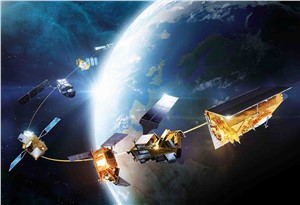 The European Space Agency (ESA) has announced the selection of Airbus Defence and Space for major Copernicus environment missions.

Copernicus is the biggest provider of Earth observation data in the world – and while the EU is at the helm of this environmental monitoring programme, ESA develops, builds and launches the satellites. It also operates some of the missions and ensures the availability of data from third party missions.

The LSTM mission will carry a high spatial-temporal resolution thermal infrared sensor to provide observations of land-surface temperature for sustainable agriculture and to predict drought.

Airbus Defence and Space in Germany will lead the development of the Polar Ice and Snow Topographic Mission (CRISTAL), with an order value of €300m and Thales Alenia Space will supply the altimeter instrument.

The CRISTAL mission will measure and monitor sea-ice thickness and overlying snow depth.

In addition to the LSTM infra-red instrument, Airbus Defence and Space will also be responsible for the L-band Synthetic Aperture Radar (SAR) payload for ROSE-L with Thales Alenia Space Italia as prime contractor.

The L-band SAR will enable ROSE-L to see through materials such as vegetation, support forest management and monitor subsidence and soil moisture.

The total order volume resulting from the recent bid decisions, including payloads and critical equipment supply, is expected to be around €1.1 billion. Final contract negotiations will start shortly and contract signatures are expected in the coming weeks.

"Onboard all Copernicus Sentinel satellites to date, Airbus is delighted that ESA is again entrusting us with such key European environmental missions, under the world’s most ambitious Earth observation programme. LSTM is the first Copernicus mission awarded to a Spanish company and is the second new generation infra-red instrument entrusted to Airbus this year. CRISTAL will leverage Airbus’ success on the Sentinel-6 ocean-monitoring satellite, launching later this year and the ROSE-L payload confirms our world leadership in space radar technology." Jean-Marc Nasr, Head of Space at Airbus

Tell a friend:
Airbus Defence and Space Proposals for the Copernicus Project Selected by ESA