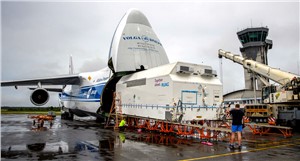 Payload preparations for Arianespace’s next mission have moved into full swing with arrival of the third satellite to be lofted on a heavy-lift Ariane 5 flight from the Spaceport in French Guiana on July 28.

Delivered yesterday by a chartered An-124 cargo jetliner is the BSAT-4b broadcasting satellite, which will be orbited by Arianespace as part of a turnkey contract with the Japanese operator B-SAT and the spacecraft manufacturer, Maxar. The jetliner touched down at Félix Eboué Airport near the capital city of Cayenne, where BSAT-4b was unloaded for transfer by road to the Spaceport.

BSAT-4b will ride in Ariane 5’s lower payload position, joining the launch’s other two passengers: the Galaxy 30 relay satellite, and the Mission Extension Vehicle-2 (MEV-2) – both of which are supplied by Northrop Grumman, and will serve the operational needs of Intelsat.

The July 28 liftoff is designated Flight VA253 in Arianespace’s launcher family numbering system, marking the 253rd mission of an Ariane launch vehicle. It will be Arianespace’s fifth mission of 2020 and the third this year to geostationary transfer orbit.

Ariane 5’s July mission will be followed by Vega in August
Arianespace’s scheduling of Flight VA253 as its next launch comes after the decision to postpone Europe’s first small-sat rideshare mission with the light-lift Vega launcher until August 17.  This shift resulted from the persistence of exceptionally unfavorable winds at altitude over the Spaceport, resulting in multiple postponements of the liftoff despite a full availability the launcher and its 53 satellite passengers on the Small Spacecraft Mission Service (SSMS) Proof of Concept flight.

The new launch date for Vega Flight VV16 in August was decided in anticipation of a more favorable weather forecast, which is based on modeling of the winds. The interim period will be used to recharge the Vega launcher’s batteries, as well as those of the mission’s satellites.

Flight VV16 will place its payload of seven microsatellites and 46 smaller CubeSats into Sun-synchronous orbits. The unfavorable high-altitude winds on this mission’s northward trajectory from the Spaceport in French Guiana will not affect Flight VA253, as the Ariane 5 will be flying an eastward trajectory towards geostationary transfer orbit.