Hera and its asteroid target 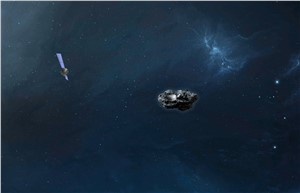 ESA’s Hera mission for planetary defence seen approaching the Dimorphos asteroid moonlet, which is destined to become the subject of an audacious deflection experiment.

The newly-named Dimorphos – at 160 m across, about the size of Egypt’s Great Pyramid – orbits around the main 780 m mountain-sized Didymos near-Earth asteroid. Next year NASA’s Double Asteroid Redirection Test (DART) will leave Earth and in October 2022 will perform a kinetic impact with Dimorphos, in an attempt to deflect its orbit.

Then in 2024 ESA’s Hera spacecraft will set off to perform a close-up investigation of the result: the sole object in the Solar System to have had its orbit shifted by humankind in a measurable way.

By gathering details of Dimorphos’s mass, composition and the crater left by DART, Hera – along with the two CubeSats it will carry with up, for close-up views – will let researchers assess the effectiveness of the deflection technique in as full a manner as possible, enabling its reuse if needed against an oncoming asteroid.

Given the go ahead at ESA’s Space19+ Ministerial Council last November, Hera is set to undergo its preliminary design review in the autumn.

Tell a friend:
Hera and its asteroid target