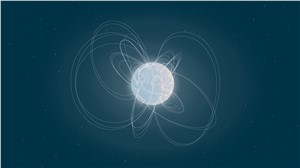 An observation campaign led by ESA’s XMM-Newton space observatory reveals the youngest pulsar ever seen – the remnant of a once-massive star – that is also a ‘magnetar’, sporting a magnetic field some 70 quadrillion times stronger than that of Earth.

Pulsars are some of the most exotic objects in the Universe. They form as massive stars end their lives via powerful supernova explosions and leave extreme stellar remnants behind: hot, dense and highly magnetised. Sometimes pulsars also undergo periods of greatly enhanced activity, in which they throw off enormous amounts of energetic radiation on timescales from milliseconds to years.

Smaller bursts often mark the onset of a more enhanced ‘outburst’, when X-ray emission can become a thousand times more intense. A multi-instrument campaign led by XMM-Newton has now captured such an outburst emanating from the youngest baby pulsar ever spotted: Swift J1818.0−1607, which was originally discovered by NASA’s Swift Observatory in March.

And there is more. Not only is this pulsar the youngest of the 3000 known in our Milky Way galaxy, but it also belongs to a very rare category of pulsars: magnetars, the cosmic objects with the strongest magnetic fields ever measured in the Universe.

“Spotting something so young, just after it formed in the Universe, is extremely exciting. People on Earth would have been able to see the supernova explosion that formed this baby magnetar around 240 years ago, right in the middle of the American and French revolutions.”

The magnetar has yet more claims to fame. It is one of the fastest-spinning such objects known, whirling around once every 1.36 seconds – despite containing the mass of two Suns within a stellar remnant measuring just 25 kilometres across.

Immediately after the discovery, the astronomers looked at this object in further detail using XMM-Newton, NASA’s Swift and NuSTAR X-ray satellites, and the Sardinia Radio Telescope in Italy.

Unlike most magnetars, which are only observable in X-rays, the observations revealed that Swift J1818.0−1607 is one of the very few to also show pulsed emission in radio waves.

“Magnetars are fascinating objects, and this baby one appears to be especially intriguing given its extreme characteristics,” says Nanda Rea of the Institute of Space Sciences (CSIC, IEEC) in Barcelona, Spain, and principal investigator of the observations.

“The fact that it can be seen in both radio waves and X-rays offers an important clue in an ongoing scientific debate on the nature of a specific type of stellar remnant: pulsars.”

An especially magnetised type of pulsar, magnetars are generally thought to be uncommon in the Universe – astronomers have only detected around 30 – and are assumed to be distinct from other types of pulsar that show up strongly in radio emission.

But X-ray researchers have long suspected that magnetars may be far more common than this view suggests. This new finding supports the idea that, rather than being exotic, they may instead form a substantial fraction of the pulsars found in the Milky Way.

“The fact that a magnetar formed just recently indicates that this idea is well-founded,” explains co-author Alice Borghese, who worked on the data analysis with colleague Francesco Coti Zelati – both also based at the Institute of Space Sciences in Barcelona.

“Astronomers have also discovered many magnetars in the past decade, doubling the known population,” she adds. “It’s likely that magnetars are just good at flying under the radar when they’re dormant, and are only discovered when they ‘wake up’ – as demonstrated by this baby magnetar, which was far less luminous before the outburst that led to its discovery.”

Additionally, there may not be as wide a diversity of pulsars as initially thought. The distinctive phenomena shown by magnetars may also occur in other types of pulsar, just as Swift J1818.0−1607 exhibits characteristics – radio emission – not usually attributed to magnetars.

“While interesting in their own right, magnetars are relevant on a far wider scale: they might play a key role in driving a whole host of transient events we see in the Universe,” adds Francesco.

“Such events are thought to be somehow connected to magnetars either during their birth, or in the very early stages of their lives, making this discovery especially exciting.”

Examples of transient events include gamma-ray bursts, super-luminous supernova explosions, and the mysterious fast radio bursts. These energetic events are potentially linked to the formation and existence of young, strongly magnetised objects – like Swift J1818.0−1607.

“To infer this magnetar’s age, the researchers needed high-resolution long-term measurements of both the rate at which it is spinning, and of how this spin is changing over time,” adds ESA XMM-Newton Project Scientist Norbert Schartel.

“XMM-Newton’s European Photon Imaging Camera, EPIC, observed Swift J1818.0−1607 just three days after it was discovered, enabling the researchers to extract an accurate picture of its X-ray emission, and characterise its rotation and spectral properties in detail.”

“This kind of research is hugely important in understanding more about the stellar content of the Milky Way, and revealing the intricacies of phenomena occurring throughout the wider Universe.”