After months of intense simulation training, two delays at the launch pad and a dress rehearsal, the Solar Orbiter control teams at ESA's mission control are ready for the Sun. 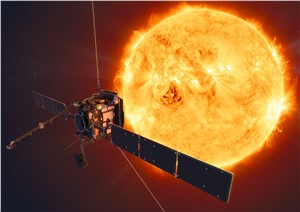 Solar Orbiter will take the first direct images of the Sun’s poles, but getting into the right orbit to do this means taking a loopy path through the inner Solar System, borrowing thrust from the powerful gravitational fields of Earth and Venus.

Teams of spacecraft operations engineers, flight dynamics experts, software and ground station engineers have spent months preparing for this ten year journey to explore the Sun, and can now confirm they are “green for launch”.

A few times like the present
Travelling in an interplanetary orbit, dependent on planetary gravity assists, means the relative position of the planets in the Solar System is a key factor in determining when and how Solar Orbiter can be launched.

As the planets are constantly in motion, any delay to the liftoff means altering Solar Orbiter’s path to the Sun. A long delay of a few weeks and the current launch opportunity could be missed entirely.

Solar Orbiter was originally set to launch on 6 February 2020, Central European Time. However an issue with the launcher’s ‘Wet Dress Rehearsal’ at the Cape Canaveral launch site in Florida, meant it was delayed by 24 hours.

A second delay due to unfavourable weather conditions now means liftoff is planned for 05:03 CET on Monday 10 February, four days after the original launch date.

Delays like these are quite routine when launching spacecraft. In fact, the launch window for Solar Orbiter is 21 days long, meaning it could be launched during a two hour period on any day between 6-26 February.

When the planets align
From one day to the next, mission analysts at ESA need to determine precisely where the rocket needs to get Solar Orbiter for it to reach Venus for the first interplanetary gravity assist without any large spacecraft manoeuvres.

Unlike BepiColombo, using onboard electric propulsion as well as the gravity of the planets to guide it to Mercury, Solar Orbiter has only small thrusters able to slightly adjust its position in space.

For the rest, it will rely on the Atlas V rocket placing it into the right escape orbit, followed by the gravity of Venus, Earth and the Sun, as well as ESA flight dynamics experts determining how the gravitational pull of these heavenly bodies can be best exploited.

Teams at ESA mission control have planned the trajectories for every possible launch day in advance. In each daily two hour launch window, it is in principle possible to launch the spacecraft every five minutes.

Altogether, mission analysts have planned 25 trajectories for each day, with more than 500 prepared for this launch window.

“After the closure of the current launch window on 26 February, the next chance to launch the spacecraft will be when Earth and Venus are aligned again and an entirely new trajectory will be required,” explains José Manuel Sánchez Pérez, mission analyst for Solar Orbiter.

“This planetary alignment normally occurs every 20 months, making another launch window possible in October 2021. However, we have calculated that by adding an extra gravity assist withEarth, Solar Orbiter could also be launched in October this year.”

Dressed for warmer climes
A dress rehearsal on Thursday 6 February saw the Solar Orbiter control teams do their final run through of the launch before the spacecraft sets off for real.

This practice differs from the months of simulation training carried out previously, because this time they were actually connected to the spacecraft itself, nestled in the rocket at the Kennedy Space Centre in Florida.

“To discover more about the Solar System we either observe it with remarkable telescopes on Earth, or visit it with space explorers like Solar Orbiter - and its mission control that takes us there”.