First flight of the Boeing 777X: Safran on board! 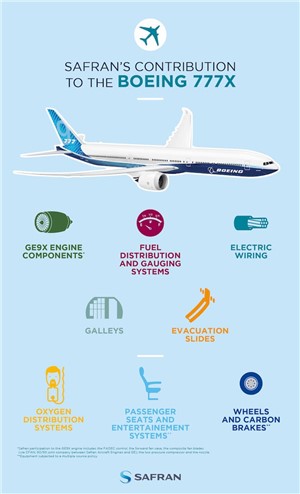 The Boeing 777X, the biggest twin-engine jetliner in the world, successfully completed its maiden flight on January 25, 2020, over Seattle, birthplace of the American aircraft manufacturer. No fewer than eight Safran companies have participated in this program: Review of the Group's technologies on board the plane.

A worthy successor
The successor to the long-haul 777 (Boeing's best-selling aircraft), to date the 777X family includes two aircraft, the 777-8 and the 777-9, with the bigger version capable of carrying up to 425 passengers.

Safran equipment has a firm presence on board this family of aircraft : oxygen distribution systems, fuel distribution and gauging equipment; kitchens, passenger seats, electrical harnesses, FADEC system for the GE9X engines, wheels and carbon brakes (an option for the airline companies), the titanium acoustic nozzle...

Tell a friend:
First flight of the Boeing 777X: Safran on board!