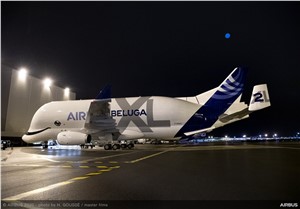 There’s a new shape in the sky as the next-generation BelugaXL begins regular operations in facilitating Airbus’ production ramp-up across the company’s commercial aircraft programmes.

The initial BelugaXL – featuring a livery with distinctive whale-type smile – was delivered for operation in December, and it entered service earlier this month. Ultimately, six of the highly modified twin-engine A330 airliners will operate from 11 destinations in Europe, providing Airbus with additional transport capacity as these oversize cargo airlifters gradually replace the five Beluga ST prececessors – which are derived from the company’s cornerstone A300 aircraft. All Beluga operations are managed by Airbus Transport International (ATI), an Airbus subsidiary.

According to Philippe Sabo, ATI’s Head of Oversize Air Transport, the BelugaXL’s service entry represents a step-change in the way aircraft components are transported across Europe.

“With 30% more capacity than the existing Beluga ST, it really will help us to better support the production ramp-up for A350 XWBs and the single-aisle A320 Family,” explained Sabo. “And its high-speed cargo loading system means we can significantly reduce turnaround times – something which is key to achieving our targets.”

Enhancing Airbus’ production network
The BelugaXL’s greater size enables the new-generation airlifter to accommodate a set of A350 XWB wings, for example, speeding up their transport from the Broughton, UK production site to the programme's final assembly line in Toulouse. The aircraft also can carry the A350 XWB's largest fuselage section with room to spare.

“We are really impressed with the aircraft,” Sabo added. “The way it behaves is fantastic and I particularly like the livery – it feels like the aircraft is looking at me when I’m close to it!”

ATI will operate a combined ST/XL fleet until mid-2023 as the remaining five BelugaXLs enter service. Airbus’ programme, customer support, engineering and ATI teams will work together in supporting the start of operations and subsequent ramp-up, with a second BelugaXL to be delivered in mid-2020, followed by a third in early 2021.

Air transport is Airbus’ primary method for moving large aircraft components across its European production network – including sites in France, Germany, Spain and the UK – which is complemented by the company’s use of road, rail and sea.