The two-year test campaign for the propulsion system of the European Service Module ends with a test of the auxiliary engines. 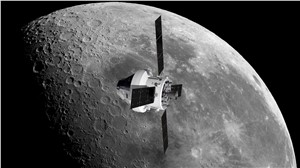 The Propulsion Qualification Module (PQM) is the test model for the propulsion subsystem of the European Service Module (ESM) of the spacecraft Orion.  NASA colleagues nicknamed it a kind of "battleship" version of the ESM propulsion subsystem. It was delivered by Airbus to the NASA White Sands Test Facility in New Mexico in 2017; since then, 55 hot firing tests and 3 discrete pressurisation tests have been run in a two-phase test series that should help certify the Service Module propulsion system for the first Orion flight on Artemis 1.

In a message to the Orion team, Valerie Cazes, Orion Programme Manager at Airbus congratulated the entire team: "We have now reached a very important milestone on the way to the qualification of our Orion propulsion system. I would like to thank everyone who has contributed to this success. The conditions were difficult - not only climatically - and a lot of meticulous work was necessary. But now we have taken an important step and together with our customers we have gained extremely important insights".

Mark Kirasich, NASA's program director for Orion and the Artemis mission said, "An incredible achievement.  It's been a long road and we have indeed learned a lot. Congratulations to the whole team."

The European Service Module has 33 engines: 24 for attitude control, eight auxiliary engines and the main engine, and a reused engine (the Orbital Maneuvering System) from NASA's Space Shuttle program. The propulsion system also includes high-performance valves, hundreds of sensors, fuel tanks and piping, and the electronics that is necessary to control this complex system. Although the PQM is not used in space, this is an important step in the development of the Orion program. Complex systems for manned space flight must be tested and qualified as flight hardware on the ground before they can be used in space. Engineers test how the system will behave in various environments to ensure that it will function properly in space.