Europe Powers Up for 3rd and 4th Orion Spacecraft

Europe will power the NASA spacecraft that take astronauts to a new international outpost and forward to the Moon, following decisions made by ESA Member States at Space19+ in Seville, Spain. 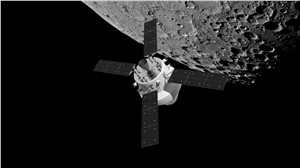 The decision by Member States show a strong commitment to progressing Europe’s exploration of the Solar System and will see ESA play a key role in Artemis missions by providing European Service Modules for Orion spacecraft three and four.

ESA is already providing the European Service Modules that will power missions one and two. The first Artemis mission will see Orion fly without astronauts around the Moon, with the second mission flying with astronauts on a direct return trajectory around the Moon.

Under current Artemis planning, the third and fourth missions will see NASA’s Orion spacecraft bring astronauts to the Gateway and on to a landing on the lunar surface.

The news confirms that humankind’s return to the Moon will be truly international, strengthening the collaboration between NASA and ESA on Orion, Artemis and much more.

The first European Service Module is currently at NASA’s Plum Brook Station in Ohio, USA, coupled to the Crew Module and Service Module Adapter for thermal-vacuum and electromagnetic tests on the complete Orion spacecraft.

The second European Service Module is being built in Bremen, Germany, by prime contractor Airbus. The structure is complete and technicians are working round the clock to complete the module, starting with integration of 11 km of wiring.

NASA is committed to landing on the Moon by 2024 and Europe is now a trusted lunar partner, supplying the modules to propel Orion and support the astronauts with energy and consumables en route.

Tell a friend:
Europe Powers Up for 3rd and 4th Orion Spacecraft