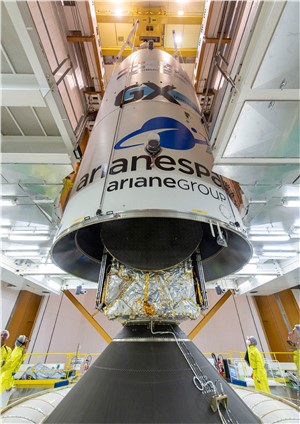 The Ariane 5 for Arianespace’s eighth mission of 2019 is now fully assembled following integration of its two satellite passengers at the Spaceport in French Guiana.

During activity in Ariane 5’s Final Assembly Building, the upper payload component – containing TIBA-1, mounted on its SYLDA dispenser system and protected by an ogive-shaped fairing – was lowered into position over Inmarsat GX5, which was previously installed atop the launcher’s central core.

This step clears the way for final checkout, which will enable the launch readiness review to be conducted on November 19, followed by Ariane 5’s rollout to the Spaceport’s ELA-3 launch zone the following Thursday, and an early evening liftoff on Friday, November 22.

The upcoming mission is designated Flight VA250 in Arianespace’s numbering system, and it will deliver the two satellites into geostationary transfer orbit.

Payload performance
To be deployed first during the 34-minute flight sequence is TIBA-1 – a communications spacecraft for the Government of Egypt, developed by Thales Alenia Space and Airbus Defence and Space as co-prime contractors, with Thales Alenia Space acting as lead partner of the contract. It will perform a dual mission in Ka-band for secure and broadband communications, operating from an orbital position at 35.5 deg. East.

The second passenger – Inmarsat GX5, which was produced by Thales Alenia Space – is a very high throughput communications satellite that will be fully integrated into Inmarsat’s current Global Xpress high-speed network. To be located in a geostationary orbit at 11 deg. East, it is equipped 72 Ka-band fixed spot beams and four steerable beams to direct additional capacity where it is needed.

Ariane 5 will deliver a total payload lift performance of approximately 10,495 kg. during the mission – with this combined mass factoring in TIBA-1 and Inmarsat GX5, plus the launch vehicle’s dual-passenger dispenser system and satellite integration hardware.