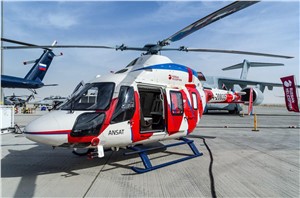 “Listening to the needs of our customers and bringing them the right solutions is of the utmost importance to Pratt & Whitney,” said Satheeshkumar Kumarasingam, vice president of customer service at Pratt & Whitney. “With the rapid growth of civil helicopters in Russia, we want to ensure our customers have more local and personalized service. Helicopter emergency medical services (HEMS) is a growing priority in the region. This is one way we are supporting HEMS and other critical missions.”

PW207K customers can contact Pratt & Whitney or HSC to speak with a representative about the company’s engines and services, including our Certified Pre-Owned (CPO) engine program for used helicopters, our Fleet Service Plan (FSP) for customers with growing fleets of two to five helicopters, and our Eagle Service™ Plan (ESP™) New Engine Option (NEO) for customers who want even more choices for engine overhaul and exchange.