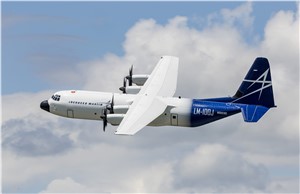 The Lockheed Martin (NYSE: LMT) LM-100J commercial freighter received its type design update certification from the Federal Aviation Administration on Nov. 15. This particular FAA certification allows the LM-100J to operate from any commercial airfield in the world.

In 2014, Lockheed Martin announced it would update its existing FAA A1SO type certificate for its Model L-382J aircraft to be marketed as the LM-100J, a civil-certified production variant of the military proven C-130J Super Hercules.

The LM-100J is the modernized version of the Lockheed Martin L-100 freighter (Lockheed Model 382). More than 100 L-100s were produced from 1964-1992 at the then Lockheed-Georgia Co., facility in Marietta, Georgia, and many of these aircraft continue to support global operations today.

"Like its military counterparts, the worldwide L-100 fleet is a much tasked and much relied upon. As this fleet reaches the end of its operating life, customers told us the only replacement for the L-100 is an LM-100J," said Rod McLean, vice president and general manager of Lockheed Martin's Air Mobility & Maritime Missions line of business.

"This updated FAA certification enables the LM-100J to literally go anywhere in the world to fulfill the unique and demanding requirements it was built to support," McLean added. "As the LM-100J enters into service, we are proud that it will continue to exemplify and expand the already unmatched capabilities of the C-130J Super Hercules family."

Through select design changes, the LM-100J performs as a civil multi-purpose aircraft capable of rapid and efficient cargo transport and select specialized mission requirements. The LM-100J is an efficient and ideal airlift solution in delivering bulk and oversize cargo, particularly to austere locations around the world.

The LM-100J incorporates technological developments and improvements over the existing legacy L-100 freighters that result from more than two decades of C-130J operational experience, including more than 2 million fleetwide flight hours flown by crews in 19 nations around the world.

"We had the unique opportunity to design and build a completely new commercial airlifter with insights from a proven airframe," said Marilou Franklin, director of the LM-100J Program at Lockheed Martin. "Our goal was to produce an airlifter that was as safe as it was capable as it was advanced. In partnering with our existing L-100 operators, our network of suppliers and the FAA, we did that ? and more ? with the LM-100J."

Notable operational LM-100J enhancements compared to a legacy L-100s include:

Extending a legacy of air mobility training, Lockheed Martin's HTC is a combined academic and simulator facility purpose-built for training efficiency. Training resources include dedicated LM-100J initial qualification courses and a reconfigurable, FAA-certified Level D simulator. This training is provided by expert Lockheed Martin instructors who, combined, have more than 90 years of experience.

Next steps for the LM-100J program include the 2020 delivery of two aircraft to Pallas Aviation, the LM-100J launch operator.