Making Planets in a Rocket 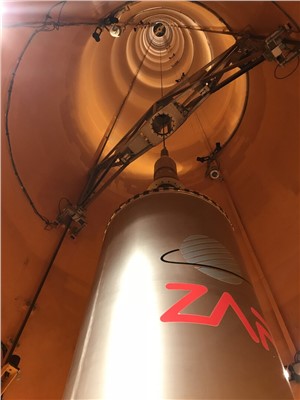 How are celestial bodies created? Aside from philosophical questions, researchers are taking practical steps to investigate the very first moments when planets are born – on a sounding rocket launching from Sweden next week.

Astronomers conclude that planets are formed out of cosmic dust and gas from an interstellar cloud around a new-born star, but exactly how dust particles start to assemble into larger celestial bodies is still a mystery.

Go back far enough in time and Earth will not have existed, but its formation must have started somewhere, sometime. And this very first clumping together of dust particles in zero gravity will be investigated in the ICAPS experiment.

Researchers will shoot silicon dioxide – also called silica – dust particles into a vacuum chamber and observe their growth, how they interact and stick together.

“It is a bit like hosting a party where you want people to mingle and interact”, likens Astrid Orr of ESA’s SciSpacE team. “We are trying to create the ideal conditions for small groups to form by adjusting the style of the room, or playing the right music – in this case we are adjusting the conditions in the experiment chamber,  relative speed of the particles and especially particle concentration.

“Like making a snowman, you need the right snow.”

The ICAPS experiment is a 1.2-m-long module that houses the vacuum chamber, an injector of silica particles, and cameras to observe their interaction. The experiment has ‘flown’ with promising results in the ZARM drop tower in Bremen, Germany, but scientists want to observe the process for longer.

Drop tower experiments allow for up to nine seconds of microgravity whereas sounding rockets will allow researchers to watch up to six minutes of planet formation in progress.

The experiment aims to simulate growth of micrometre-sized particles – similar in size to talcum powder – to millimetre-sized aggregates and investigate the physical phenomenon of Brownian motion. This process is believed to be the main mechanism of how “planet embryos” evolved in the young Solar System.

The ICAPS experiment will provide insight into the very early stages of planet formation. Meanwhile, ESA’s exoplanet satellite Cheops – scheduled for launch in mid-December – will study the end result of this process: planets outside our Solar System typically orbiting other stars and known as exoplanets.

Tell a friend:
Making Planets in a Rocket