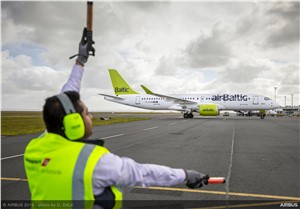 Airbus’ newest member of its single-aisle jetliner family – the A220 – has been introduced to a wider segment of the air transport markets in the Pacific and Asia, showcasing how this versatile aircraft meets the region’s operational requirements with high-level performance, increased range capabilities and wide-body-type comfort.

The demonstration tour, performed from 26 October to 12 November, utilised an A220-300 leased from Latvia’s airBaltic, with visits at nine destinations in seven countries.

In the Asia-Pacific region, the A220 currently is operated from Korea, and ETOPS routes are being flown from Tanzania to India. Service is expected to start with the A220 next year in Vanuatu.

During presentations to airlines, leasing companies and local media, nearly 1,000 guests visited the aircraft on static display, and more than 500 were aboard demonstration flights to experience the A220’s high level of comfort. The aircraft was also shown to local media that attended dedicated briefings organised at each stop.

High praise for the A220’s cabin
Overall feedback from visitors on the static and demonstration flights has been very positive, with guests highlighting how much they appreciated the wide, bright and quiet cabin, as well as the state-of-the art interior and cockpit features.

The latest A220 demo tour completes an extensive operation organised by Airbus to showcase the A220 to various stakeholders in this part of the world. In late July, the A220 embarked on a two- week tour to six other destinations across Asia; in total, the A220 has visited 15 destinations in the fast-growing region this year.