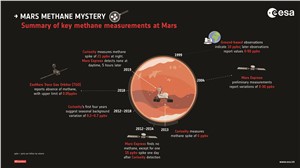 In June, NASA’s Curiosity rover reported the highest burst of methane recorded yet, but neither ESA’s Mars Express nor the ExoMars Trace Gas Orbiter recorded any signs of the illusive gas, despite flying over the same location at a similar time.

Methane is of such fascination because on Earth a large proportion is generated by living things. It is known that methane has a lifetime of several hundred years before it is broken down by the Sun’s radiation, so the fact that it is detected on Mars suggests it has been released into the atmosphere recently – even if the gas itself was generated billions of years ago.

The methane mystery on Mars has had many twists and turns in recent years with unexpected detections and non-detections alike. Earlier this year it was reported that ESA’s Mars Express had detected a signature that matched one of Curiosity’s detections from within Gale Crater.

A recent spike by Curiosity, measured on 19 June 2019, and the highest yet at 21 ppbv, adds to the mystery because preliminary analysis suggest that Mars Express did not detect any on this occasion. (For comparison, the concentration of methane in Earth’s atmosphere is around 1800 ppbv, meaning that for every billion molecules in a given volume, 1800 are methane.)

The Mars Express measurement technique allowing data to be inferred right down to the martian surface with its limit of detection around 2 ppbv.

The ESA-Roscosmos Trace Gas Orbiter (TGO), the most sensitive detector for trace gases at Mars, also did not detect any methane while flying nearby within a few days before and after Curiosity’s detection.

In general, TGO is capable of measuring at parts per trillion levels and accessing down to about 3 km altitude, but this can depend on how dusty the atmosphere is. When measurements were taken at low latitudes on 21 June 2019, the atmosphere was dusty and cloudy, resulting in measurements accessing 20-15 km above the surface with an upper limit of 0.07 ppbv.

The global lack of methane recorded by TGO is adding to the overall mystery, and corroborating the results of the different instruments is keeping all teams busy.

“Taking the results together suggests that the latest spike measured by Curiosity was very short lived – less than one martian day – and likely local,” says Marco Giuranna, principal investigator for the Planetary Fourier Spectrometer onboard Mars Express that is used to detect methane.

“Curiosity measured the methane at night, and if it was released at that time, we would expect it to have been trapped near the surface until sunrise before getting rapidly mixed and transported away. As a result, there would be no chance for it to be detected by Mars Express or TGO.

“By comparison, the spike we co-measured in 2013 must have been of a longer duration or more intense at its source – which we believe was outside Gale Crater – such that it could be detected by our instrument on Mars Express as well.”

The teams are continuing to look into the influence of atmospheric circulation between day and night, and if the location of Curiosity inside an impact crater plays a role. They are also studying the way that methane is destroyed, in case the gas is being absorbed by surface rocks again before it is circulated more widely into the atmosphere.

“Combining observations from the surface and from orbit with future coordinated observations will help us understand the behaviour of methane in the atmosphere, with non-detections like that from TGO providing upper limits, constraints and important context,” adds Håkan Svedhem, ESA’s TGO project scientist.

The Curiosity measurements were made by the Sample Analysis at Mars tunable laser spectrometer, the Mars Express measurements were taken by the Planetary Fourier Spectrometer (PFS) and the TGO measurements were taken by the Atmospheric Chemistry Suite (ACS) and the Nadir and Occultation for Mars Discovery (NOMAD) instrument. The TGO results were presented at the International Conference on Mars in Pasadena, California in July and at the EPSC-DPS conference in Geneva in September. The full analysis of the Mars Express data is ongoing and will be reported formally at a later date.