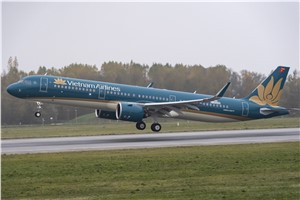 The signing took place in a ceremony in Vietnam's capital, Hanoi, and was attended by U.S. Secretary of Commerce Wilbur Ross, along with officials from Vietnam Airlines and Pratt & Whitney.

"Vietnam Airlines' objective is to have the highest level of safety, performance and reliability on our entire fleet which includes GTF-powered aircraft," said Dang Ngoc Hoa, Executive Vice President, Vietnam Airlines. "With Pratt & Whitney's EngineWise services solutions, we are able to optimize our fleet and better serve our customers."

"We are thrilled to provide Vietnam Airlines with state of the art service technologies for their GTF engines," said Rick Deurloo, chief customer officer and senior vice president, Customers at Pratt & Whitney. "We appreciate the close relationship we have developed with the airline and look forward to supporting their fleet for many years to come."