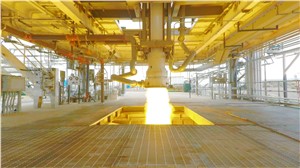 When the Orion spacecraft flies to the moon for the first time - without astronauts on its maiden flight - it needs a perfectly working propulsion system. 33 engines ensure that Orion masters the journey to the moon, around it, and back to Earth. The propulsion system also includes high-performance valves, hundreds of sensors, fuel tanks and fuel lines, and electronics that control this complex system.

A special test program was developed to prove that this propulsion system works as expected. Airbus engineers developed and built their own test module, the Propulsion Qualification Module (PQM), for ESA and NASA. Testing takes place in the desert of New Mexico (USA), in NASA's White Sands Test Facility.

Since 2017 the PQM is already located in White Sands. The development of the test procedures, the hot run tests and the subsequent evaluations are time-consuming. "We have to carry out many different tests here, depending on the mission scenario," explains Jan Hass, test manager for the Airbus team.

"Main engine, auxiliary engines and attitude control engines are needed and controlled in different situations. In July, we qualified propulsion subsystems, for which all engines were ignited in several situations. In August, we tested the main engine and ran it together with the auxiliary engines for more than 10 minutes. In doing so, we simulated the launch into Earth orbit following a mission abort."

"The design and structural implementation of the propulsion system are very challenging tasks," explains Mathias Gronowski, Chief Engineer in the Orion ESM Program. "It's not just a matter of functionality, but also of ensuring that all other subsystems are safe when the engines are on fire. Given the packing density of the service module, these are really tricky situations for our designers. The engines of the service module are needed on the journey to the moon only in certain situations, but exactly then everything must be right, pressure, impulse etc....   Furthermore, the interfaces with the crew module have to be considered."

All the more important are the good test results now for the Airbus team. "I would like to express my sincere thanks and respect to all involved for this achievement," says Oliver Juckenhöfel, Head of On-Orbit Services & Exploration. "This is an impressive demonstration of our capabilities for our customers and will continue to maintain our good reputation with ESA and NASA".

The tests have not yet been fully completed.  However, the results are so significant that the already assembled Orion can now be flown including the European Service Module from the Kennedy Space Centre in Florida to the NASA test site in Plum Brook (Ohio). Thermal vacuum tests are scheduled there.

Meanwhile, Jan Hass is looking forward to the final series of tests. "A major milestone has been reached. It's certainly tough conditions here in New Mexico, but being part of the team that brings people to the moon again just makes me proud".

Orion propulsion system
Orion's main thrust is provided by a reused Space Shuttle engine. With a thrust of 27 KN, it ensures that the spacecraft enters the moon's orbit and can leave for Earth again. Eight auxiliary engines are ready to take over should the main engine fail. Finally there are 24 ArianeGroup attitude control engines from Lampoldshausen. All engines are supplied by four tanks, each holding 2000 litres of fuel, pressurized by helium tanks. An electronic box ensures correct control and a sophisticated electronic pressure control concept ensures that the engines are supplied with the required fuel. 400 bar must be regulated down to the required pressure.

Orion: On behalf of the European Space Agency ESA, Airbus designs and builds the European Service Module to provide power, energy, consumables and thermal control for the astronauts. Hence Airbus works in close co-operation with NASA and Lockheed Martin in the US and coordinates companies in 10 European countries. During the IAC in October in Washington the international space community will discuss the roadmap to lunar exploration - of which Orion is an essential part. Airbus is more than happy to contribute and participate to this human endeavor.