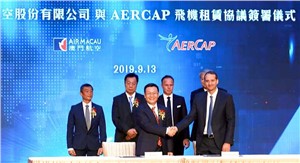 AerCap Holdings N.V. ("AerCap" or the "Company") (NYSE: AER) has announced today that it has signed long-term lease agreements with Air Macau for three new Airbus A321neo aircraft. The agreement was signed during a ceremony in Macau to celebrate the airline's 25th anniversary. The first aircraft is scheduled to deliver in November 2020 with the two remaining units delivering through October 2021.

In 1995, Air Macau leased their first aircraft, three Airbus A321s and one A320 from AerCap, which were the first aircraft of their type in Macau.

"AerCap is very pleased to announce the signing of this agreement with our long-time customer, Air Macau, for the lease of three A321neos," said Aengus Kelly, CEO of AerCap. "With the rapid development of Macau's economy, Air Macau is well placed to take advantage of this opportunity and to expand its network into new markets in China, Southeast and Northeast Asia using the most modern, fuel-efficient aircraft. We thank Mr. Chen Hong, Chief Executive Officer and Chairman of Air Macau's Executive Committee for the confidence he has placed in AerCap and we look forward to working with the Air Macau team for the next 25 years and beyond."

"I would also like to take this opportunity to express my sincere thanks for the kind help and support from AerCap. We are pleased to cooperate with AerCap, a strategic partner that we recognize and hold in high regard," said Mr. Chen Hong, Chief Executive Officer and Chairman of Air Macau's Executive Committee. "The A321neo aircraft is the most technologically advanced single-aisle aircraft series," Mr. Zhao, the Chairman of Air Macau Board added. "We will continue to adhere to our strategic vision of 'Being rooted in Macau, Serving Macau, Being the preferred airline for Macau travellers', bringing more advanced products and better service to passengers, and building an air bridge for Macau."