A Ground-up Approach to Electric Aircraft 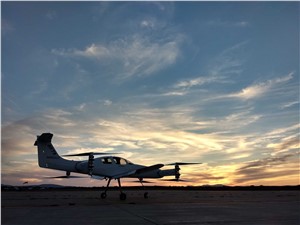 What happens when you combine the electric-propulsion expertise of an air taxi start-up with the composites know-how of a growing aerospace engineering and manufacturing company? Team Blue-BETA Racing brings the best of both worlds to Air Race E, soon to be the world’s first all-electric airplane race, in its drive to advance electric-propulsion technology.

2018 was a memorable year for BETA Technologies. Not only did it propel its first electric vertical take-off and landing (eVTOL) vehicle into the air, the US-based start-up also designed the world’s largest manned electric aircraft and began manufacturing the first-ever megawatt-scale aircraft recharging station. Now, in partnership with composites experts Blue Force Technologies, BETA Technologies is building a new aircraft for Air Race E. The goal? To drive development of advanced aircraft concepts while accelerating the transition to electric-powered aviation.

"Racing is a learning environment, where high-risk or novel technologies can be rapidly tested more easily than in production." Kyle Clark, Head of Team Blue-BETA Racing

Q. Why did your team decide to enter Air Race E?

Because it looks like a lot of fun, and we didn’t want to miss out! Air Race E offers us a great way to accelerate some of our core technologies. Racing is a learning environment, where high-risk or novel technologies can be rapidly tested more easily than in production. These technologies include, for example, our high-torque density motor architectures or our mobile 1MW recharging facility.

Q. Can you give us some insight on the aircraft you’re currently working on? What is your approach?

It’s a ground-up configuration that makes the most of our engineering and fabrication capabilities, as well as the advantages of electric propulsion. In addition to much greater efficiency than their gas counterparts, electric powertrains have a lower frontal area compared to an internal combustion engine of equivalent power when used in a fixed-wing aircraft. To make the most of this, we’re designing an aircraft with an extremely small firewall area compared to an internal combustion-based racing airplane. The front profile of our aircraft is actually more akin to a glider. We also believe that a ground-up airframe enables us to best deal with the challenges of providing racing power from an electric powertrain, which has a very complex cooling flow.

Q. What sets your team apart in this race?

Our team is composed of experts in electric propulsion and composites. Blue Force Technologies provides world-class composite fabrication capabilities. They specialise in large soft-tooling-based resin infusion composites, which are ideal for the rapid prototyping environment of air racing. For ground testing, BETA Technologies has an array of test devices for electric propulsion, power and controls systems.

Q. For you, what is the most exciting aspect of the race?

It’s exciting to see the pure performance characteristics of electric powertrains compared to traditional gas engines in a comparable airframe. The series will provide a fantastic showcase for electric aircraft.

Q. How important is electric flight to the future of aviation?

The transition to electric aviation is both necessary and inevitable.

Eliminating our reliance on fossil fuels and leaded gasoline in aviation is critical as the industry continues to grow. It also potentially allows for a more financially viable future in aviation. Thanks to a reduced number of moving parts and mechanical complexity, electric aircraft have already shown lower operating costs in light sport aircraft, and we expect this to scale up to general aviation and larger vehicles.

Tell a friend:
A Ground-up Approach to Electric Aircraft