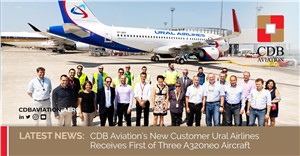 The aircraft is part of the lease agreement for a fleet of three A320neos, with two further jets slated for arrival through the end of 2019. The delivery also marks the introduction of the first CFM International LEAP-1?-powered A320neo to be operated in Russia.

The neo is expected to support the expansion plans of Ural Airlines’ fleet and will be deployed on its growing flight network, with a planned increase in operations between Moscow’s Domodedovo and Yekaterinburg’s Koltsovo international airports and destinations throughout Europe and to China.

“We are very pleased and inspired about the start of our cooperation with CDB Aviation in terms of the program for the planned increase of Ural Airlines' fleet,” commented Ural Airlines Head of PR Projects Olga Tushkova. “The delivery of the first Airbus A320neo equipped with the latest LEAP-1A engine is an outstanding event for our company that will allow us to increase the efficiency of our core business - carriage of passengers.”

Patrick Hannigan, CDB Aviation President and Chief Commercial Officer, commented: “We congratulate the Ural Airlines team on this significant delivery. We are thrilled to be making history once again, just merely a week following our introduction of the first A320neo in Africa with Air Seychelles, to bring this first LEAP-powered neo with our partner Ural Airlines to the CIS region.”