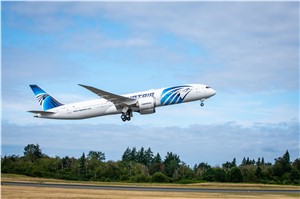 Boeing [NYSE:BA] today delivered the fifth 787 Dreamliner for EGYPTAIR via a lease agreement with AerCap. Egypt’s national carrier took advantage of a new Boeing program and filled its new super-efficient airplane with biofuel for the flight home, underscoring the airline’s drive to improve the efficiency and sustainability of its operations.

“We are committed to the sustainable growth of our airline and supporting commercial aviation’s efforts to protect the environment,” said Ahmed Adel, chairman and CEO of EGYPTAIR Holding Company. “The 787-9 Dreamliner is a great fit for our network and provides our customers with a responsible choice for air travel.”

The 787 Dreamliner was designed for superior fuel efficiency and environmental performance. Its lightweight composite materials, highly-efficient engines and other aerodynamic improvements reduce fuel use and emissions by 20 to 25 percent compared to the airplanes it replaces. The Dreamliner family has saved 37 billion pounds of fuel since entering service in 2011 — the equivalent of taking 10 million cars off the road for a year.

“We are delighted to support EGYPTAIR’s fleet renewal strategy and to be a part of this important industry-first milestone,” said Aengus Kelly, CEO of AerCap. “The 787 Dreamliner is a perfect choice for EGYPTAIR, allowing the airline to reduce fuel use and emissions by up to 25 percent while meeting its sustainable growth ambitions, as well as supporting AerCap’s target to transition its fleet to over two-thirds new technology aircraft by 2021.”

AerCap is the world’s largest customer of the 787 aircraft, with a total of 114 owned, managed and on order.

For the flight to its home base in Cairo, EGYPTAIR became the first operator to use a new Boeing program that offers operators the option to use biofuel on delivery flights. Sustainable aviation fuels have been shown to reduce carbon dioxide emissions by up to 80 percent through its lifecycle. The 5,925 nautical-mile (10,973 kms) trip flight from Seattle to Cairo represents the longest 787 delivery flight using sustainable fuel.

Boeing has been an industry leader in fostering the development of sustainable aviation fuel. Research, testing and rigorous review by the company – in collaboration with other airframe and engine manufacturers and aviation stakeholders – led to regulatory approval of the first

sustainable fuel for commercial aviation in 2011. Since that time, airlines around the world have flown nearly 190,000 passenger flights on a blend of sustainable and conventional fuel.

EGYPTAIR used a biofuel produced by World Energy at its refinery in Paramount, Calif., the first facility designed to make renewable jet fuel on a commercial scale. Made from agriculture waste, the fuel is certified for commercial use and can be blended with conventional jet fuel without modifications to the airplanes, engines or fueling infrastructure.