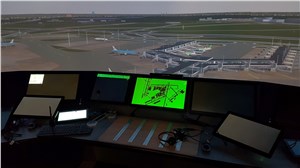 Recently NLR carried out real-time, human-in-the-loop simulation activities on the NARSIM validation platform in a realistic Amsterdam Airport Schiphol tower working environment as part of the European Commission SESAR 2020 Programme (Project 3B: Airport Safety Nets) with the aim to assess the benefits of an enhanced safety net tool for ground controllers. The tool alerts air traffic controllers for apron and taxiway conflicts that present a potential collision risk but also allows them to predict traffic hotspot areas in which the collision risk is assumed to be higher up to 15 minutes in advance.

Development of the tool for conflict detection started several years ago. The tool had already been evaluated in different environments and with different controller teams (LVNL, LFV, ENAV, FAA) in the past. The airports considered at the time varied in size, traffic volumes and movement area layouts. They were Rotterdam Airport, Milan-Malpensa Airport, and Charlotte Douglas International Airport (in collaboration with NASA Ames). During these earlier evaluations controllers were asked to comment on the utility of the alerts under different circumstances in terms of traffic and weather. As the tool was developed with the aim to serve as a final layer of safety being independent from the clearances given, it merely looked at surveillance information (aircraft state consisting of position, speed and heading) as well as the respective movement area layout as input to the detection algorithm.

The SESAR 2020 activities of NLR started with a detailed tuning session of the detection tool for the Schiphol Airport layout in July 2018. Engineers and ATC operational experts looked at appropriate parameter values for the operational rules underlying the Taxiway Conflict Detection algorithm triggering the alerts. Furthermore, cut-off values for the conflict search strategy were determined to reduce the occurrence of alerts being perceived as nuisance by the controllers.

A Global and Regional Analysis: Focus on Applications, Products, and Country-Wise Assessment

Eventually, in November 2018, several simulation exercises with realistic Schiphol Airport traffic scenarios were carried out, comparing a situation without use of the tool with situations with use of the tool applying different parameter settings to different areas. In some of the exercises the ground controller was supported by a Traffic Density Estimation tool that predicted traffic hotspot areas based on planning information (stands and gates, runways, standard taxi routes) and that indicated these areas on the traffic situation display. The controller could then reduce the impact of the predicted traffic hotspots on the operation by applying a different control strategy or by using a different conflict detection parameter set in the hotspot areas to prevent nuisance alerts from occurring. One of the goals of the exercises was to determine whether any of the solution strategies was preferred and whether conflict detection with the adapted parameter set was still able to alert controllers in time to prevent collisions.

Results of the SESAR 2020 exercises will be analysed and reported within several weeks from now and are expected to be available to the general public by the end of 2019.