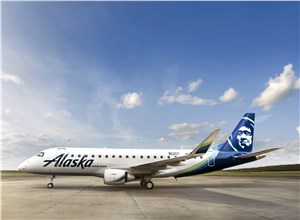 Embraer celebrates the delivery of its 1,500th E-Jet, an E175, to Seattle-based Horizon Air, a wholly owned subsidiary of Alaska Air Group, Inc. Horizon Air’s E175 is configured with 12 seats in first class, 12 in premium class and 52 in the main cabin. By the end of the year, Horizon will have a fleet of 26 E175 with four more jets scheduled for delivery in 2019.

“Delivering our 1,500th E-Jet is no small feat. Over the years we have continuously worked to outperform in order to offer our customers the best solution for their business models, and the E-Jet family’s success in the market is proof of that effort and thought process within the Company,” said John Slattery, President & CEO, Embraer Commercial Aviation. “Celebrating this special milestone with such an esteemed airline operator is an incredible honor, and partnerships like these inspire us to continuously propel our vision of building the best, most efficient aircraft to greater heights.”

“We’re thrilled to have more than doubled the number of E175s in our fleet over the past year,” said Gary Beck, Horizon Air president. “Since introducing them in 2017, the Embraer jets have been a huge hit with our guests flying to and from our West Coast hubs and focus cities. With all the comforts of a larger mainline jet, guests can stay connected with inflight Wi-Fi and enjoy no middle seat whenever they fly.”

Embraer’s E-Jet family has made its mark in the aviation landscape as Embraer is the only manufacturer to develop a modern family of four aircraft specifically targeted for the 70 to 130-seat segment. Embraer has sold more than 435 E175s to airlines in North America since January 2013, earning more than 80% of all orders in the 76-seat jet segment.

With an average mission completion rate of 99.9% and more than 18 million flight cycles, the E-Jet fleet has surpassed the 25 million flight hour milestone. In addition to their proven reliability, E-Jets have a strategically-located global network of customer support and services, four of which owned by Embraer and 13 are authorized.

Embraer is the world’s leading manufacturer of commercial jets up to 150 seats. The Company has 100 customers from all over the world operating the ERJ and E-Jet families of aircraft. Embraer has received almost 1,800 orders for the E-Jet family and delivered 1,500 of those orders. Because of their versatility, the E-Jets redefined the traditional concept of regional aircraft as they also serve mainline and low cost carriers.