From Amsterdam to Sydney in Three Hours: Hypersonic Flights in the Stratosphere 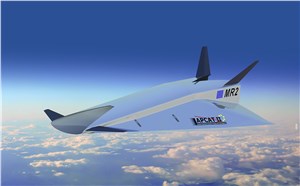 A hypersonic aircraft can travel at velocities up to eight times the speed of sound (i.e. Mach 8), and up to ten times faster than a present-day standard airliner. At those speeds, it would take only three hours to fly from the Netherlands to Australia. Hypersonic aircraft fly in the stratosphere, which results in less air resistance and therefore lower fuel consumption. Another advantage is that there is still ‘space’ in the stratosphere to handle increases in air traffic. Which propulsion system would be required for this type of aircraft, how do we ensure sustainable flights, and how can we safeguard passenger comfort on-board?

These and other questions are being investigated in the STRATOFLY project, which is coordinated by Politecnico di Torino. The project is financed by the EU’s Horizon 2020 programme. The researchers are also studying whether a hypersonic test aircraft can be developed by 2035. The technologies being examined STRATOFLY are currently at Technology Readiness Level (TRL) 2 to 3, and will reach TRL4 by the end of the project, which runs from June 1st 2018 to year-end 2020.

NLR is a participant in the STRATOFLY project, which focuses on innovative hydrogen-based hybrid propulsion systems. The environmental impact will also be analyzed, including the effects of emissions on climate and the ozone layer. In addition, research will be conducted into the well-being of passengers, looking at factors such as comfort, biorhythm and safety.

One of the challenges is to reduce the noise produced by the propulsion system. NLR will conduct research into the noise generated by the so-called ‘air turborocket’ engines, which are integrated into the fuselage and eject their exhaust flow in a single joint nozzle. These engines will be used during the subsonic take-off and landing phase. At high altitudes, air turborocket engines accelerate the aircraft to speeds up to Mach 4. Propulsion is then taken over by a dual-mode ramjet or supersonic combustion ramjet (‘scramjet’) engine.

NLR will predict jet noise levels using semi-empirical models, based on data obtained from experiments with scaled engines integrated into the fuselage (without a combustion chamber). NLR assembles these engines in its in-house model workshop and also tests them in-house.

NLR research will also focus on ways to reduce the noise produced by the propulsion system. Unlike in present-day aircraft, the propulsion system of a hypersonic aircraft is not attached to a wing, but integrated into the fuselage. Using absorbent materials and installing the system in a specific location within the fuselage can theoretically make a contribution to reducing engine noise.

The STRATOFLY project is a first step in exploring potential new aviation routes at altitudes currently inaccessible to passenger aircraft. This will help accommodate the expected six-fold increase in global air traffic by 2050. The ultimate goal is to realize a revolutionary form of aviation that is much faster and more efficient than current modes of air travel, while simultaneously delivering better sustainability performance.

Tell a friend:
From Amsterdam to Sydney in Three Hours: Hypersonic Flights in the Stratosphere