Cobham announced today that its radiation-hardened (RadHard) and High Reliability Microelectronics are featured in NASA's Parker Solar Probe that was launched in August. 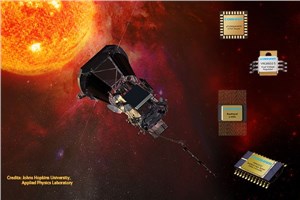 Cobham announced today that its radiation-hardened (RadHard) and High Reliability Microelectronics are featured in NASA’s Parker Solar Probe. Launched in August, the Parker Solar Probe Mission will provide unprecedented observations of the Sun. As the fastest object ever made by man, the probe will travel at record speeds through intense heat and radiation conditions to the Sun’s atmosphere in its effort to better understand how the star affects our solar system. The probe recently performed the first celestial maneuver of its seven year mission by achieving a gravity assist in order to pass by Venus.

“For over 60 years, Cobham has engineered some of the most complex, challenging space components in existence. We are delighted to partner with NASA once again and play a role in this historic space exploration mission and we congratulate the entire Parker Solar Probe team on their recent launch and milestone,” said Jeff Hassannia, Senior Vice President of Business Development and Technology, Cobham Advanced Electronics Solutions. “Cobham’s technology boasts extensive flight pedigrees and deliver the performance that space and satellite manufacturers can trust.”