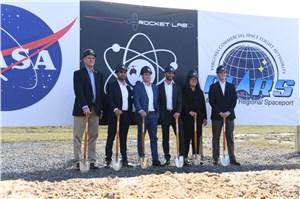 US orbital launch provider Rocket Lab has today confirmed it will build its first US launch pad for the Electron rocket at NASA’s Wallops Flight Facility in Virginia, USA. The site will be Rocket Lab’s second dedicated launch complex and builds on Rocket Lab’s existing ability to launch up to 120 times annually from the world’s only private launch site, Rocket Lab Launch Complex 1, in New Zealand.

Launch Complex 2 will be capable of supporting monthly orbital launches and is designed to serve US government and commercial missions. The site brings Rocket Lab’s global launch availability across two launch complexes to more than 130 missions per year. The option to select from two launch sites adds an extra layer of flexibility for small satellite customers, offering an unmatched ability to rapidly deploy space-based assets with confidence and precision from a preferred location.

“Accessing space should be simple, seamless and tailored to our customers’ missions - from idea to orbit. Launching from a second pad builds on Rocket Lab’s ability to offer the small satellite industry unmatched schedule and launch location flexibility,” said Rocket Lab founder and CEO Peter Beck. “Having proven the Electron vehicle with a successful orbital launch this year, we’re thrilled to expand on our ability to provide rapid, reliable and affordable access to orbit for small satellites.

“We’ve worked closely with the experienced and welcoming teams from Virginia Space and the Mid-Atlantic Regional Spaceport at Wallops to design a pad and processes that will enable an agile and streamlined approach to small satellite launch on US soil,” he added.

Rocket Lab will work with Virginia Space to construct dedicated pad infrastructure at the site, tailored to the Electron launch vehicle. In addition to the pad, Rocket Lab will develop a Launch Vehicle Integration and Assembly Facility in the Wallops Research Park to support the simultaneous integration of up to four Electron vehicles. The facility will also contain a control room with connectivity to LC-2, as well as dedicated customer facilities. This new facility, combined with the purpose-built gantry located at LC-2, will provide significant and dedicated vehicle processing capability and flexibility to meet Rocket Lab’s high launch cadence.

Through construction and day-to-day operations, Rocket Lab expects to create around 30 jobs immediately to directly support Launch Complex 2, with this number predicted to increase to approximately 100 as launch frequency increases. The development of Launch Complex 2 will also see Rocket Lab continue to expand Electron rocket production at the company’s headquarters in Huntington Beach, California, to supply complete launch vehicles for government and commercial customers.

“We are honored to be Rocket Lab’s selection for Launch Complex 2,” stated Dale Nash, CEO and Executive Director of Virginia Space. “There is an incredible synergy between Virginia Space and Rocket Lab and we are proud to support their missions launching from U.S. soil. We’d like to thank Rocket Lab for their confidence in our team. Virginia Space and MARS employees are standing ready to do everything we can to ensure successful, safe and timely launch missions for Rocket Lab just as we do for every customer of the Spaceport.”

Rocket Lab continues to assess additional launch sites in the US and internationally to provide additional launch flexibility for small satellite customers. The company also maintains agreements with Cape Canaveral in Florida and Pacific Spaceport Complex Alaska to conduct launches from existing pads as required.