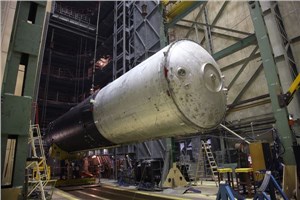 Khrunichev Center (part of ROSCOSMOS State Corporation) and the Central Machine Building Research Institute (TsNIIMash) are performing joint vibration tests of one of the Universal Rocket Modules (URM-1) that form the core of the Angara-A5 first stage.  These tests started in late 2017 and will take several months to complete.

The tests conducted at TsNIIMash are required to objectively assess the quality and reliability of the article prior to initiating serial production.

The serial production of URMs for the Angara family of rockets is being developed at Khrunichev's Polyot Plant located in Omsk.  The purpose of the tests is to assess the functional readiness for the serial production of Angara launch vehicles at the Polyot plant which is outfitted with the latest production equipment and tooling, and employs cutting edge production processes.  Currently, separate parts are being manufactured at the plant for the second and third flight-ready rockets but the article is not being assembled here.

The Polyot plant in Omsk has already produced and began shipping some of the sets of URMs for the second flight-ready Angara-5 rocket.  The test unit of one such module (this unit is labeled "PV" (FV), which stands for flight + vibration tests) is being tested at the TsNIIMash loads and dynamics test site which has exceptional capabilities.

Flight tests of the launch system began at the Plesetsk Cosmodrome in 2014 with two successful launches:

Proposed variants in the Angara Space System family are: the two-stage lightweight Angara-1.2 LV, the three-stage medium Angara-A3 LV (there are no current plans to produce Angara-A3), and the three-stage heavy-lift Angara-A5 LV.

The difference in Angara launch vehicle variants is based on the number of universal rocket modules that form the core (URM-1 on the first and second stages and URM-2 on the upper stages).  The lightweight Angara 1.2 launch vehicle consists of one URM-1.  The launch vehicle using the maximum number of URM-1s would be the heavy-lift Angara A5.

The Angara A5 LV consists of three stages.  The first stage of Angara A5 consists of four URM-1s, the second stage –has one URM-1 and the third stage – one URM-2.  URM-1 is a rocket module that acts as a single-use first and second stage booster and is based on the NPO Energomash RD-191 engine.  The URM-2 rocket module boosters are based on the RD-0124A liquid propellant engine with a thrust of 30 tons (designed by KBKhA).  Its design has a great degree of continuity (commonality) with the liquid propellant 14D23 engine used on the stage three booster of the upgraded medium-class Soyuz-2 LV.  Test flights of Soyuz-2 began in 2004.

The Angara Space System is being produced at the Plesetsk Cosmodrome in accordance with a Decree of the president of the Russian Federation.  Putting the Angara Space System into operation will enable Russia to perform launches of all types of spacecraft from its territory, providing Russia with independent, guaranteed access to outer space regardless of the nature and direction that military, political and economic relations with other countries take.

The new Space System should enable delivering unmanned spacecraft for scientific, socio–economic, dual and commercial purposes to earth orbits with various altitudes and inclinations (including geostationary and geosynchronous transfer orbits) and escape orbits.  The RF Ministry of Defense and ROSCOSMOS (formerly the Federal Space Agency) are the government customers, while FGUP (Federal State Unitary Enterprise) KhSC is the principal design company.