Rocket Lab Deploys a Star for Humanity Into Orbit

Rocket Lab Deploys a Star for Humanity Into Orbit 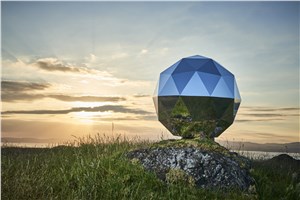 A newly launched satellite is expected to become the brightest object in the night sky, creating a shared experience for all humanity, after being launched on board Rocket Lab's Electron launch vehicle last week.

The Humanity Star is intended to serve as a focal point for humanity, as every single person on Earth will have the opportunity to see and experience it. The satellite will appear as a bright, glinting star shooting across the night sky.

Created by Rocket Lab founder and CEO Peter Beck, the project is about drawing people's eyes up and encouraging people to look past day-to-day issues and consider a bigger picture.

"No matter where you are in the world, or what is happening in your life, everyone will be able to see the Humanity Star in the night sky. My hope is that all those looking up at it will look past it to the vast expanse of the universe and think a little differently about their lives, actions and what is important for humanity," he says.

"For us to thrive and survive, we need to make big decisions in the context of humanity as a whole, not in the context of individuals, organisations or even nations. The Humanity Star is a way of looking beyond our immediate situation, whatever that may be, and understanding we are all in this together as one species, collectively responsible for innovating and solving the challenges facing us all. We must come together as a species to solve the really big issues like climate change and resource shortages."

The satellite is currently orbiting the Earth after being launched from New Zealand and successfully deploying to orbit on Sunday 21 January 2018, NZDT. It is the first New Zealand-designed and built satellite to orbit the Earth.

The Humanity Star is a geodesic sphere made from carbon fibre with 65 highly reflective panels. The sphere spins rapidly, reflecting the sun's light back to Earth, creating a bright, flashing effect that can be seen in the night sky. Orbiting the Earth every 90 minutes and visible to the naked eye from anywhere on the globe, the Humanity Star is designed to be a bright symbol and reminder to all on Earth about our fragile place in the universe.

The Humanity Star will orbit the Earth for approximately nine months before its orbit starts to decay and the satellite is pulled back into Earth's gravity, burning the satellite on re-entry.

The Humanity Star's location, including when it will be visible from different regions of the planet, can be tracked in real-time at www.TheHumanityStar.com

Tell a friend:
Rocket Lab Deploys a Star for Humanity Into Orbit