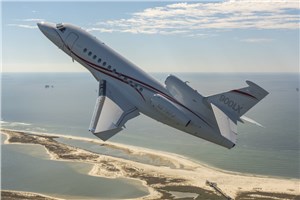 Dassault's front line Rafale fighter will also be featured at the show, which opens today, as part of a French Air Force exhibit.

The 4,750 nm (8,800 km) Falcon 900LX is the most advanced version of the proven and highly capable Falcon 900 trijet line, which has set records for reliability, versatility and fuel economy since it was first introduced. Equipped with advanced winglets that reduce drag and optimize climb performance, the Falcon 900LX can fly non-stop from Rabat to Dubai, Delhi or Washington, or from Marrakech to Johannesburg or Rio. It is the only jet in its class capable of landing with nearly a full fuel load enabling, for example, a takeoff from Rabat with a stop in Marrakech for additional passengers before continuing to intercontinental destinations without refueling.

Since it was first introduced, the Falcon 900 family has evolved into six different versions, the latest of which is the 900LX, certified in 2010. It is equipped with the most advanced equipment on the market, including Dassault's second-generation award winning EASy II flight deck and FalconCabin HD+ cabin management system. Its three engine configuration - unique to Dassault - offers improved runway performance and added safety margin when flying over oceans and hostile terrain.

"In addition to performance and cabin comfort, aircraft efficiency has become a decisive factor in choosing an executive jet," said Gilles Gautier, Vice President, Falcon Sales for Dassault Aviation. "And the Falcon 900LX is the most efficient business jet in its class, offering 40% better fuel economy than any competing aircraft."

Qualities like this, added to the legendary robustness of Falcon jets which are designed and built to the exacting standards of Dassault fighters, make them top performers in North Africa which has more than a dozen Falcon aircraft currently in operation.