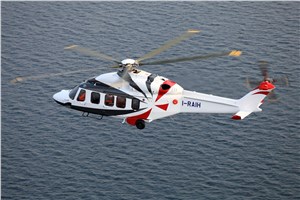 LCI, the aviation leasing arm of The Libra Group, has today committed to expand its helicopter fleet with firm orders for a further 11 AgustaWestland aircraft valued at US $125 million (€110 million).

The new aircraft, which are converted from options held by the helicopter lessor, are made up of a mix of AW139, AW169 and AW189 aircraft. The aircraft will be delivered between 2015 and 2016, and take LCI's total fleet to approaching 90 aircraft.

Crispin Maunder, Executive Chairman of LCI, says: "We are reaffirming our commitment to the helicopter market by enlarging our future helicopter fleet to meet the continuing growth in demand levels. With many operators in both offshore oil production and Emergency Medical Services (EMS), we continue to see good long-term prospects in these important sectors."

LCI's helicopters are already in service supporting deep sea oil and gas production, along with aero-medical transport and search & rescue roles. The helicopter division comprises a fleet of delivered and ordered helicopters approaching ninety new units, including the market-leading AgustaWestland AW139, AW169 and AW189 helicopters and next-generation Airbus Helicopters EC175 and the newly-unveiled Airbus EC225e, for which LCI is a launch customer.

LCI placed almost US $1 billion in new AgustaWestland and Airbus Helicopters orders at the 2014 HAI Heli-Expo in Anaheim, California. In January last year, the lessor announced investment of more than US $100 million in LCI Helicopters by KKR Financial Holdings, LLC, and in October successfully closed a five-year, US $325 million asset-backed credit facility.

Since its inception in 2004, LCI has acquired fixed wing and rotary aircraft with a combined value of approaching US $6 billion.