The F-35 program is strong, but not perfect, said its top manager. 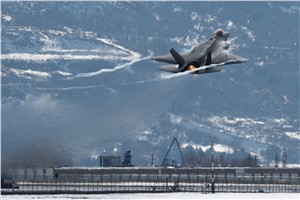 These aircraft are flown by the Air Force, Navy and Marine Corps on land and afloat in 24 locations worldwide, he said. Additionally, the United Kingdom, Norway, Israel, Japan, Belgium, Poland and Italy will be taking delivery of F-35s, and Singapore is likely to, as well.

The program is now close to initial operating capability, he said.

With this new organization, decision authority is pushed lower, and leaders are empowered to lead, he added.

As the needs of the warfighter change, the F-35 has been designed to adapt to those changes, he said.

A process called "continuous capability, development and delivery" or C2D2, allows incremental software and hardware add-ons as they become available, he said. "It provides the flexibility to add or subtract capabilities as the warfighter's priorities and needs evolve."

In the past, aircraft availability has been a problem, Fick said.

However, "with the insight and help of the warfighters and aircraft maintainers, we're improving our operational fleet's availability," he said, noting that last year, the average combat mission capability rate was 73.2% — nearly 20% better than in 2018.

That's progress, but we must do better, he said.

An important aspect of the program is working with allies and partners, Fick said.

For example, regional warehouses in North America, Asia and Europe have been stood up to use the industrial innovation of other nations that fly the F-35.

Bringing the cost of the program down is very important, as well, he said. Improvements in cost reductions are being made in the development, production and sustainment areas.

Lastly, Fick said the strength of the program is the warfighters, who are figuring out how to better fight, fly and maintain the F-35. They are identifying changes they'd like to see in the ever-changing threat environment.

Fick said his people are listening to their feedback and acting on it as rapidly as possible.