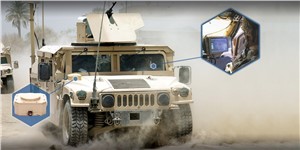 “These awards demonstrate the Army’s high confidence in Comtech’s BFT technology and innovation capabilities that can be used on future BFT systems,”said Fred Kornberg, President and Chief Executive Officer of Comtech Telecommunications Corp. “Comtech remains committed to providing the U.S. Army and its soldiers with the most innovative technology, enabling them to successfully complete all their missions, regardless of electronic warfare environments.”