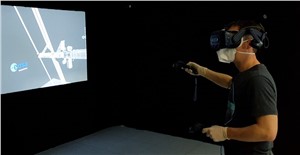 After nearly two months of confinement, it is not only school students who are progressively returning to class. ESA astronaut Matthias Maurer also returned to training at ESA’s European Astronaut Centre (EAC), starting with a slightly unusual robotics refresher.

At the end of April, Matthias donned personal protective equipment and maintained 2 m distance from instructors to participate in a training module that prepares astronauts to operate robotic devices like the Canadarm2 on the International Space Station.

Getting to grips with arm operations
The Canadarm2 is a robotic arm used during some spacewalks to help astronauts move more quickly, transport items or access hard-to-reach areas. It is also used to track and capture incoming cargo vehicles that cannot dock by themselves. In this case, crew members inside the Station must manoeuvre the arm to capture moving vehicles as they hover around 10 metres below.

ESA astronaut trainer Lionel Ferra says the task is far from simple. "If the crew fail this capture task and damage the arm, the vehicle or – even worse – the station, the consequences can be huge. The supply chain would be disrupted as badly as if the rocket launch had failed.

“That is why it requires the greatest amount of practise and refresher sessions,” he explains.

Using an intuitive VR interface, JIVE helps astronauts better understand the 3D configuration of the robotic arm and how operations would play out in space. It also enables collaborative and remote teaching to help reduce the need for travel and contact with instructors – a feature that has become increasingly important during Corona times.

DST is a robotic simulator console that enables astronauts to review and practise all the main robotics tasks such as supporting a spacewalk, commanding the arm manually, configuring automatic modes and grappling approaching vehicles.

Last month was the first time Matthias had used the VR JIVE system. In doing so he was able to take a virtual tour of the Space Station, highlight different modules, gain background information, and visualise external storage and camera locations.

As well as helping with existing training, he sees great potential in this technology for future mission training and design.

“VR allows you to live a mission and explore virtually on the ground in an immersive way before the design of different Space Station modules are finalised. It allows you to practise working in new modules or carry out new operations before a single piece of metal is processed, which will be really beneficial for missions to the Moon and even Mars” he says.

Looking ahead
Though the shift in circumstances as a result of COVID-19 has led to more stringent safety and hygiene measures, including the use of portable UV-C lights to disinfect VR equipment, Lionel says EAC’s first foray into socially distanced training was a success.

“ESA’s work in space exploration plays a vital role in both inspiring and supporting the future of humanity. We must continue operations so we can learn more and go farther, and the fact that we’re now able to keep training with just a few necessary adjustments is great news for our astronauts, ESA personnel and Europe’s future in space.”