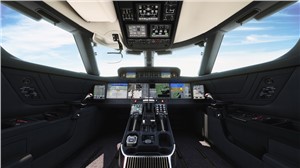 "Our active inceptors will provide pilots of these aircraft with increased situational awareness and enable enhanced handling to maintain a safe and stable flight of Gulfstream's G500 and G600 aircraft," said Ehtisham Siddiqui, vice president and general manager of Controls & Avionics Solutions at BAE Systems.

Unlike a passive system, active inceptors, which are part of the controls pilots use to fly an aircraft, have electronically controlled actuators that send tactile feedback to the pilot through the stick. The feedback is programmable for specific aircraft depending on customer requirements, and can warn pilots of impending structural or aerodynamic operating limits. One of the key benefits of active inceptors is the ability to link the pilot and co-pilot controls, so each can see and feel the other’s control inputs in real time.

BAE Systems has been a world leader in active inceptor technology for more than 25 years. The military version of the technology was originally developed for the Joint Strike Fighter program in the 1990s, achieving its first flight on the platform in 2000 and becoming the world's first certified military active inceptor on the F-35 just six years later. That same core technology achieved a handful of other world firsts, which includes first flight on helicopters such as Blackhawk and Chinook. Today, the company's active inceptors have flown on 12 different commercial and military aircraft around the world and have logged more than 200,000 flight hours.

BAE Systems is a premier provider of advanced and affordable controls, avionics, and power management systems for aircraft. From controlling the aircraft to keeping its engine running at peak performance, BAE Systems serves more than two million passengers each day. Every second of every day a plane safely takes off and lands because of its products.